JA Solar has purchased additional silicon materials from the Asian silicon industry, with an estimated amount of up to 10.5 billion yuan

Recently, the price of silicon materials has been rising continuously and transmitted to the downstream industrial chain, which has had a considerable impact on the development of the photovoltaic industry this year. Even so, it can not stop the company's "enthusiasm" for silicon materials and continue to sign silicon material procurement contracts. 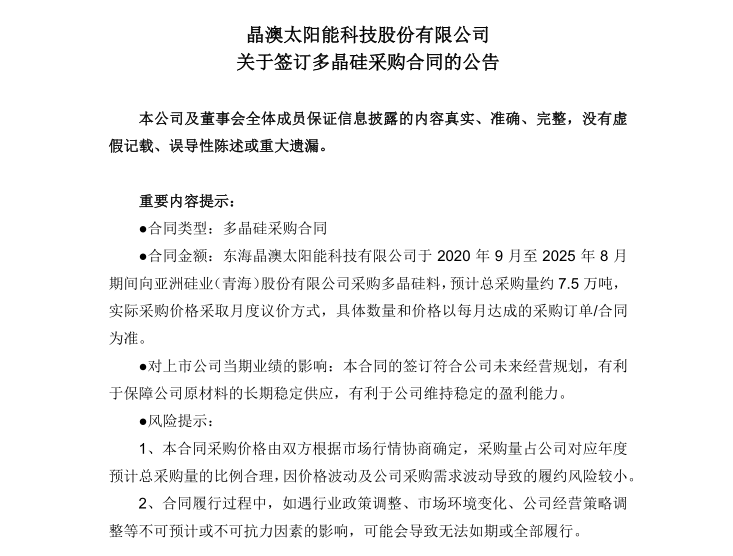 This is not a brand new procurement contract, but on August 24, 2020, based on the "Polysilicon Purchase and Sale Long Order Contract" signed by Donghai JA Solar and Asia Silicon, the purchased quantity of polysilicon materials and the extension of the supply period have been added.

Previously, the contract signed by the two parties only involved the purchase of 19,800 tons of silicon materials, which has now increased to 75,000 tons. The reason why JA Solar will add orders for silicon materials can actually be seen from JA Solar's 2020 annual report.

The huge market demand has caused photovoltaic companies to increase their weight. Starting in 2020, component companies will build production bases across the country. However, after entering 2021, the rise in the price of silicon materials has been transmitted to the downstream links, including the prices of cables, films and inverters have risen slightly. The only price drop was the “hot” photovoltaic glass last year, but it was not enough to offset the impact of rising prices of other materials on module costs.

Of course, if the photovoltaic industry in 2021 wants to surpass last year's level, it still needs silicon materials to "cool down".