A new generation of DDR5 memory modules has been released intensively, and support for DDR5 CPUs will arrive soon!

Today, the domestic memory manufacturer Netac also released the latest progress of DDR5, saying that the company's DDR5 memory has entered the research and development stage and is cooperating with motherboard manufacturers such as Asus and MSI to verify compatibility testing, and has successfully booted up and run to the operating system.

Netac said that following the release of the DDR5 SDRAM memory standard in July 2020, the application of new DDR5 technology has accelerated. 2021 will be an important stage for the rapid development of DDR5 memory technology upgrades. Netac will closely follow the development trend of storage technology and make every effort to develop and promote DDR5 memory to provide more possibilities for applications in the storage industry.

In March of this year, Longsys also officially released the Longsys DDR5 memory module product (ES1). According to the official data of Longsys, the capacity of the two prototype memory is 16GB and 32GB, the frequency reached 6400MHz, and the timing is 40-40. -40-77, the working voltage is 1.1V, the parameters are better than the current DDR4 memory.

Longsys uses Intel’s Alder Lake-S ADP-S CRB development board with a 32GB DDR5 memory module. The test data of DDR5 is displayed through the AIDA64 software in the Windows 10 Pro operating system. The memory read speed is 35844MB/ s, the write speed is 32613MB/s, which is significantly higher than DDR4 memory, about 27-28%.

DDR5 is a computer memory specification. In July 2020, the Solid State Storage Association officially announced the DDR5 standard, starting at 4800MHz and reaching 6400MHz in the future. 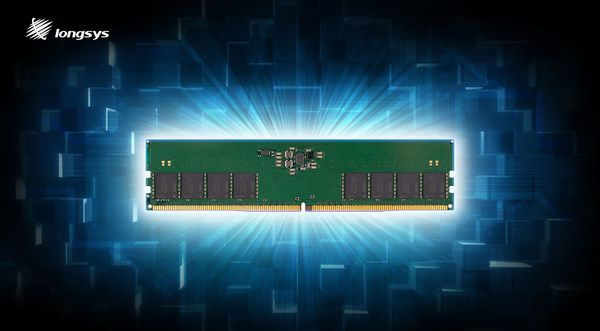 DRAM chip manufacturers such as Micron and SK Hynix have successively launched DDR5DRAM particles, and memory module manufacturers are also actively following up on the development and mass production of DDR5 memory modules. Compared with DDR4, DDR5 has lower power consumption, higher stability, and safety, and the upper limit of capacity and frequency will be increased several times.

According to JEDEC, the pin bandwidth (frequency) of DDR5 memory is twice that of DDR4. The first launch will start at 4.8Gbps (4800MHz), which is 50% more than the last-generation DDR4 standard frequency of 3200MHz, and the total transmission bandwidth is increased by 38%. In the future, it will reach around 8400MHz.

However, as for the supported platforms, AMD and Intel have not officially announced support for DDR5 CPUs. August, a subsidiary of Jiahe Jinwei, pointed out earlier this year that Intel’s Sapphire Rapids-SP server processor, 12-generation Core Alder Lake series Desktop processors, and Tiger Lake-U series (optimized version) mobile processors, as well as AMD's Van Gogh APU, AMD's "Rembrandt" series (or 6600U) are expected to support DDR5.

It is reported that at the end of this year, the Intel Alder Lake 12th-generation Core platform will support DDR5 memory for the first time. Therefore, 2021 will be the first year of the launch of DDR5 memory. This is why the DDR5 field has been extremely active this year. From particle manufacturers to module manufacturers are actively preparing for the battle to accelerate the development of new products.